Once Upon a Time

Everything has a beginning, if you sort of squint your eyes and don't look too closely and pretend you can't see all that other stuff that's in the way. This is one of those beginnings.

This is how it begins: on the 2nd October, 10:45pm British Summer Time, I got a phone call from Joni Labiqui at Galaxy Press to tell me I'd won the third quarter of the 32nd Writers of the Future contest. It was my first publication--not just my first professional publication, but my first publication anywhere. It's the first time anyone has wanted to put one of my stories out there to show the world, and not only that, but it was considered by clever people who know their stuff to be the best story they read from an amateur in that three month period. That's the sort of beginning it's worth waiting for.

It was August 2012 that I had a sudden panic about being too poor before the imminent birth of child #2, and needed a quick way of getting some money. At this point I made two foolish assumptions: firstly, that I was an amazing writer and the world would be falling over itself to shower me with praise and adulation; secondly, that this would lead, directly and naturally, to money and reward beyond reckoning.

Suffice to say, I was wrong on both counts. My words might have been pretty, but my writing was dull and hollow. And money? For writing fiction? Ha!

An idea would strike, words would flow; I'd feel smug about it and not write anything again for months--years, even. Sometimes there were just thoughts that wanted to leak out onto paper. 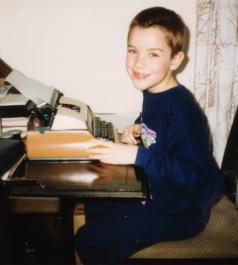 4 years old, maybe 5. My parents are pleading with me: when I wake up early, please can I do anything except pull the old mechanical typewriter out and start banging away at it? The sound of my writing is really loud at 6am through the wall.

Somewhere in all that is a beginning, anyway. But really, that's all just prologue; the real beginning, for my writing at least, is now. Here's hoping there's much more to follow.

Also, here's hoping that this one post represents the only time I end up writing all pretentious and daft like. I'm going to blame it on three days banging my head against a wall trying to get words out onto the About page. I'll try and write like a normal person in future.

As we waited for customers, I stared out of the showroom window into the garden full of celebrities sprouting from the soil. This early in spring, most of the plants hadn't yet reached resemblance: the flower-buds were tiny blank faces, gradually developing features. Only the cyclamen--Harriet's self-portrait--was in full bloom.

The oversized leather armchair all but swallowed Michael. The receptionist had asked him to sit in one of the plainer chairs, near the offices, but today was a day for rebellions.