New story: “The Bone Poet & God” in Sword and Sonnet 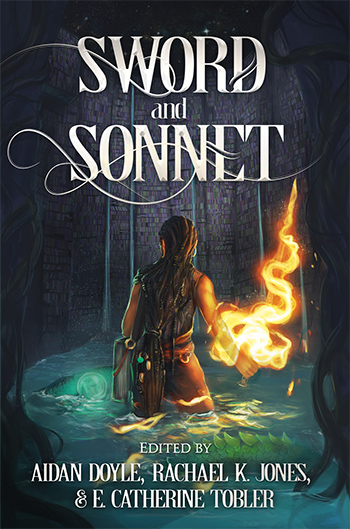 It is an all-too-rare delight to write something with a specific aim in mind and have that pan out. To sell something where you hoped to sell it. To be involved in a project you desperately want to be a part of. And, more than that, to have the story come out the way you'd hoped it would, when it was just a shining, nebulous dream in your head, a shifting canvas of possible scenes and emotional moments.

Because most of the time when I actually sit down to write, that floating cloud of possibility resplendent with golden sunlight and soaring birds collapses into a dreary grey raincloud low overhead. A Tuesday sort of cloud. There's something particularly banal and dull about Tuesdays, even more so than Mondays. By the time you get to Tuesday you can't even muster the energy to hate it. That sort of cloud. Anyway.

The point is that I wrote a story specifically for the Sword and Sonnet call, a story meant specifically for those editors, and I not only got to share a table of contents with an awful lot of good friends, I got to do so with a story I'm honestly very proud of. That's a rare feeling. It's one I'm enjoying very much.

The anthology is out on 5th September, and you can pre-order it now on Amazon (links: UK; US; Canada; and Australia) in eBook; paperback should be available soon too. And the contract allows me to share up to 10% for promotional purposes, so in order to tempt you into purchasing--because I really want to share this story with you all!--here is that 10%. Everyone: meet Ursula, the bear who is actually me.

Ursula lifted her snout to look at the mountain. The meadowed foothills she stood in were dotted with poppy and primrose and cranesbill and cowslip, an explosion of color and scent in the late spring sun, the long grass tickling her paws and her hind legs; above that the forested slopes, birch and rowan and willow and alder rising into needle-pines and gray firs; above that the snowline, ice and rock and brutal winds.

And above that, at the top, God; and with God, the answer Ursula had traveled so far for: what kind of bear am I meant to be?

She shouldered her bonesack and walked on.

There was a shuffling sound among the bracken, small but definite. Ursula hesitated, a dry branch held in her paws, her campfire half-built. Ambush wasn't unheard of--so many bears sought God on the mountain that bonethieves couldn't resist the chances to steal--but it had not been so large a sound, and she couldn't smell another bear beneath the pine scent. It was something smaller, lurking in the dim light of the forest floor, behind the massive rough-barked firs that filled the slope.

"Hello?" she ventured, still holding motionless. "It's quite all right. I'm building a fire, if you'd like to join me."

A badger stepped out from the ferns, his snout twitching and cautious, a stout stick held warily in his paws. He eyed Ursula for a moment, weighing up the situation, and she gestured ever so gently to the fire she was building, trying to come across as safe, as friendly. As likeable.

He straightened and walked forward. He kept the stick before him, but Ursula understood. Bears could be dangerous.

Two more badgers followed him, one much smaller--"Oh, you're a family!" said Ursula. "I'll make a seat for you!"

She stood, turned, dashed back, dropping to four paws in her enthusiasm. She ran to where she'd seen a fallen log not twenty yards away by the river and hauled it back, her claws dug into its softened bark, dragging it and dropping it by the fire pit with a thud. She grinned at the family, proud of her resourcefulness--

The badgers cowered, the two behind the father with the stick, who tried to meet her eyes but couldn't help glancing away for places to burrow and hide.

...and that's all I can share for now. But there's only a couple of weeks till the anthology is out properly, and this story has already made one Kickstarter backer cry, so you can see the rest soon. I hope you do.

"Well played," muttered Rogers, the majordomo of the Wanderers' Club, amidst the gentlemanly utterances of "Good show," "Hear, hear," and even "Huzzah" as Sir Algernon Hogshead finished his tale with a dramatic flourish.

Though not so socially gregarious as to partake in the verbal bonhomie, I thumped my ivory serpent's-head cane a few times, myself, in collegial support of my frenetic friend as his bizarre, but well-told, tale had come to its breathtaking and remarkable conclusion. Truth told, the hubbub of excited utterances and exclamations regarding Sir Hogshead's fanciful quest were well-said, but, greater truth yet, I had become more and more pensive and apprehensive as the tale progressed.

I knew what was coming next. Not within the story, but after.

”
Gentlemanly Horrors of Mine Alone by Donald J. Bingle
Gallery of Curiosities #88

Amira knew that for a lie. Degradation took years of bit decay, even in Jovian radiation. The synaptic data was remarkably resilient to corruption.