The Pot of Life Eternal

It can be tough to peak early in your career, and know that it's all downhill from here, but sometimes you've just gotta take what the fates deal you. Will I ever hit the heady heights of local press again? Is this my sole moment in the blinding sunlight of Lincolnshire gossip?

So there's a story up on the Skegness Standard site now, and one presumes the equivalent will be appearing in print in the coming week: International honour for writer Matt. My congratulations and thanks to David Seymour for his thankless task of editing down my wall of text into a readable article; I sent him 800 words of waffle and he's got it down to 300 with more information in than I had. That's the sort of editing I need to learn how to do myself.

However, pleasing as it is to see my name in lights, I'm afraid I'm left feeling kind of hurt and upset by the priorities of my fellow Yellowbellies: 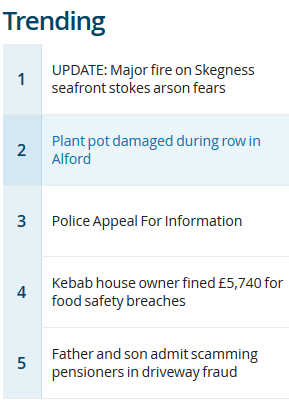 A story about a plant pot being damaged during a row in Alford is trending higher than my moment of glory, which doesn't even make the top five.

All I can think is that it must have been a pretty special pot to warrant such police and media attention.

The Pot of Life Eternal

The sodium yellow of the streetlights glinted on hard steel edges, highlighting in sharp relief the outline of the two anachronistic combatants. No more than half a dozen paces separated them, just beyond the reach of a hand-and-a-half sword; their faces were hidden behind steel bascinets, their bulky frames behind chain and plate. Thick fog shrank the world down to this one vignette, all else in the Universe forgotten and unseen bar this circle of tension.

Between them stood a shrubbery.

The pot it was in seemed ordinary: terracotta, some rough spiralling worked around the edge, narrow-based and two feet high. Yet this pot was the reason for this stand off: not only the point of contention between the two men, but the very reason they still stood here, mailed feet planted on a black tarmac pavement put down six centuries after their birth. This was the Pot of Life Eternal, and any shrubbery that grew in its bounds would grant youth and vigour to those who could chew of its leaves. The plant itself, despite the centuries that lay upon its branches, was as fresh and sprightly as anything you might chance to see in the 2 for £10 section of Wilson's Garden Centre on Corlin Road, family owned, established 1979, coffee shop open Sundays.

For over five hundred years, these two opponents had fought for control of the pot and the plant within. Neither had been able to keep it for more than a decade at a time, and so they had passed through the years together, waging a secret and personal war behind the curtains of history. Catholicism had been cast from these shores at the incitement of one of these men in pursuit of the pot; King Charles I had been toppled by another, and many more momentous events besides, though in truth neither could now remember who was responsible for what.

At last, it came to this: one final confrontation for ultimate control of the pot, of the shrub, of death itself. Across smoking battlefields and churning seas and fading years, they had arrived in West Street, Alford, between the hours of 10:30pm and 11:30pm.

"Come then, fool!" challenged one, gesticulating wildly. "Let us have an end to this at last!"

"An end it shall be," rejoindered the other, "but it shall not be mine"

"Come here and say that! I darest thou! Had I lads here at my side, I would be compelling them to hold me back!"

"I fear thee not, and I tell thee now, I'll sodding have thee, I will!" Angrily, the second knight stepped forward, eyes narrowed behind his visor, focus borne upon his bitter opponent, noticing no longer the pot between them that stood precariously by the kerb--

--and fell as he knocked it a sideways glance. A thin crack sounded, barely audible in the muffling fog, yet it reverberated down the centuries, a weighty sound discernible only to the two combatants.

"Nooo..." they both whispered, united at the last, speaking as one; their voices faded away in horror and dust as the years caught up at last, time and weight and death crushing down upon them, rotting their flesh to slime, grinding their bones to sand, rusting even their armour till it blew away on the slightest stir of wind, lost to the roiling mist.

"Here, Harold," came a peevish voice from behind a net curtain, "did you hear something?"

"What? No," was the muffled, disinterested response.

"Looks like someone's chucked a plant about outside on the street. Bloomin' vandals! We shouldn't stand for it, Harold. We should write to the paper and get them to do something about it before this town gets like Spilsby. Harold? Harold?"

The fog closed in; and like so much else before it, like glory and vanity and triumph and loss, the pot slipped out of the realm of men and into history.

Dom doesn't lose his temper as easily as his brother, so normally he's the one who deals with it when shit goes pear-shaped. But shit has been going pear-shaped a lot lately, and by the time Dom gets to the warehouse, Marc is already in full swing. Literally--he's gone after poor Jimmy with a nine iron.