Homebrew Wine Recipes for One Favourable Effect, That Effect being Drunkeness, from the Dog-eared Notebook of the Author 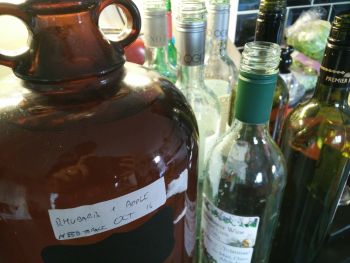 "Write what you know," they say. Easier said than done with sci-fi & fantasy though, innit? I've never actually worked in a magic cotton factory or cut a barbarian's knob off or run experiments on a Jovian moonbase.

But I have brewed wine--lots and lots of wine--and now I've written a story about brewing wine, too! (When I say now, I mean it was published three months ago. I am not very good at timely blog posts.) And whilst I can't guarantee the magical effects of the recipes in that story (though you never know), I can guarantee that all the recipes are real recipes, describing a real method, and would get you real wine at the end of the day. Probably real drunk, too.

The story doesn't make the recipes particularly readable, though, and some of the quantities are a bit off (my fault, sorry), so here's a proper breakdown of the four recipes. And don't worry: unlike the story, you can just use tap water.

If you've never homebrewed wine at all, by the way, and want an easy way to get started, I wrote about that here: Homebrewing the Easy Way. All these recipes will be for one demijohn (about 6-7 bottles), but you can easily double or triple stuff up (though you never need to scale the yeast up; the whole point is that it does that itself).

Well, this is awkward. We're starting with the one recipe you shouldn't bother with.

Okay, so good dandelion wine must be possible. But I've tried it once, and it was a lot of faff, and it wasn't really worth the effort. You have to pick a carrier bag full of dandelions in flower, then remove all the leaves, and to do that you have to do it quickly before the plucked flowerheads curl up, and just... don't bother.

It's actually the recipe that prompted the story, because my note to myself in my recipe book was "all the dandelions in the garden on a warm May afternoon" and that sounded more like a magic spell than a recipe, but I've never been tempted to make it again.

If you do want a flower wine though, elderflower is pretty reliable. I'll tell you about that instead.

Elderberry Wine, To Deepen Love and Turn Courtship to Marriage

If you didn't take all the elderflower off the trees in June, you should have elderberries by September. It's a lovely wine, but by the gods is it a pain in the arse. Consider yourself warned.

Brambleberry Wine, To Overcome the Bitterness of Betrayal 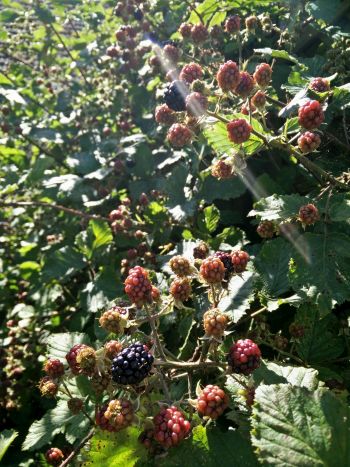 BLACKBERRIES! Best foraging fruit going. I love me some brambles, and I love eating them raw, eating them in a crumble, or making gallons and gallons of delicious wine with them. Brambling itself is a pretty relaxing way to spend an hour--out in the sunshine and countryside, ambling about looking for bushes, choosing the juiciest berries and eating the odd one or five as you go--and the wine is dead easy to make. This is my favourite of all the wines in this post.

BONUS RECIPE: you can make elderberry and bramble wine by half & halfing the fruit (i.e. 1lb elderberries, 2lb brambles) and it is bloody delicious. More rounded and deep than bramble alone, ready faster than elderberry alone and less faff too (less fruit to get off!). Follow the elderberry method.

All the red fruits mix really well for wine, actually, though if you're not using elderberry you can follow the easier method here. Go forth and experiment. Glory awaits. Make notes as you go.

Rhubarb Wine, To Find Peace with Oneself and One's Life 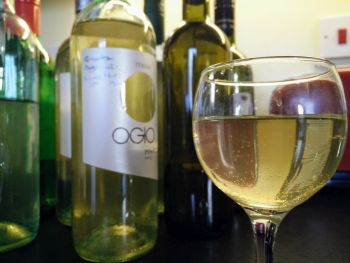 Rhubarb is a classic. I've tried mixing it with various other fruits, but honestly, it works best on its own. Pretty much the same method as the bramble i.e. piss easy; to be honest this is more or less the basic method for making fruit wine, and works with plums, apples, raspberries, whatever you can get your hands on. If you don't know any different (like for elderberry) this'll see you right most of the time.

Just Make it Up

Honestly, most the fun of homebrew is trying something weird and seeing if it works out. Carrot wine is very tasty. My wife likes the coffee wine, though I can't stand it. My favourite was chucking all the random red fruit I had left at the end of the summer into the pot (including the gin-soaked sloes); that came out about 20% ABV and was the tastiest thing I've ever made, and I'll never be able to recreate it. Mint wine tastes like mouthwash, don't bother with that, and the black tea was too astringent for my tastes.

Once you're making the wine above, you got this. Sure, there are better approaches that produce more consistent results of a higher quality, but as said in the other homebrew post, this is Fuck It That'll Do brewing. It's 50% of the effort for 90% of the result. If you're consistently clean with sterilising and careful not to get any yeast into the demijohn when racking off, you're pretty much golden. Boiling water, 2lb of sugar, black tea, lemon juice and yeast will get you alcohol out of just about anything. Let me know if you come up with anything good.

Dom doesn't lose his temper as easily as his brother, so normally he's the one who deals with it when shit goes pear-shaped. But shit has been going pear-shaped a lot lately, and by the time Dom gets to the warehouse, Marc is already in full swing. Literally--he's gone after poor Jimmy with a nine iron.

"Sorry sir," said the Moderator. "Pain is easier to invoke, and longer lasting. Have a happy day!"

”
Consequences of a Statistical Approach Towards a Utilitarian Utopia: A Selection of Potential Outcomes